This week, we air the newest episode of the “Best Thing, Worst Thing” project featuring a big-name city: Richmond, Virginia. I talked with many different residents about their favorite and least favorite things about Virginia’s capital. Many brought up the city’s ties to the Confederacy and the legacy of segregation. Others talked about the extensive collection of neighborhoods. You’ll come with me to a rally with the mayor, stroll along an island, and visit the pew where Jefferson Davis sat in church.

For an explanation of the project, check out the page here. If you are ready to learn which historical figure had turkey quills shoved up his nose, head to the City Council Chronicles podcast to download the latest episode. Or you can play it below. 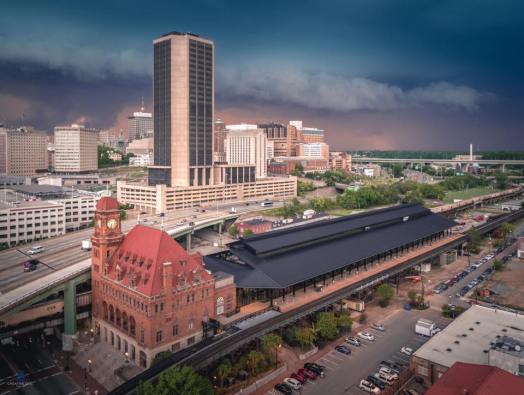 Richmond is a city of 220,000 people and the capital of Virginia. It was also the capital of the Confederacy and that legacy still lingers. The James River provides recreational opportunities and the Amtrak station provides a connection to Washington, D.C. and beyond. During our visit, we stand in the middle of the water, attend a rally with the mayor, and visit a restaurant that will be gone in a year. We hear from a real estate agent, some college students, a teacher, a tour guide, people who have moved away and returned, and two political watchdogs.

City council day in Troup, Texas only comes ’round once a month. This tiny outpost of 1,900 people doesn’t need some fancy city hall with desks and microphones and such. They’re perfectly fine with foldin’ tables and the chairs you’d sit on in a high school cafeteria.

Heck, Troup is so easygoing that they’ll do a meeting without two of their five councilmen. Too bad for those guys: Councilman Gary Salyer brought potato chips and he wasn’t shy about passing them around!

The first order of business was for the mayor to approve a change in ambulance services. “I am prepared to sign it right now so you can leave with it,” Mayor Joe Carlyle said to some guy the hospital sent, adding his John Hancock to the note in blazingly fast legislative efficiency.

The man thanked the mayor, announcing that “I’m gonna run over and give Neil some moral support at this other city council” in Henderson. He ran out, leaving the council with an audience of me.

“I’m on a diet. I’m gettin’ 400 calories a day right now,” the mayor groused, sipping a Big Gulp of something-or-other.

“Have one of these,” Councilman Salyer exclaimed, tossing the mayor his bag of chips.

“You drinkin’ all the whiskey you can?” city manager Gene Cottle inquired, jokingly (I think). Note to the council: I will spot you some dough for cushioned chairs and 1,600 more calories for your mayor.

Cranky as he was on his diet, the mayor took to complaining about the trains running through town and backing up traffic. “We’re gonna go and express dire concerns because it’s been about as bad as it’s ever been.”

At this point, everyone in the room raised their hackles about those darn trains.

“Again on Easter Sunday…Couldn’t get across the tracks!…Saturday, and then the Sunday morning…”

They agreed to complain some more and then moved on.

“We have several employees who are celebrating their tenth anniversary with the city in May, ” said the city manager. There could be a little shindig at the next meeting, but…

“I will not be at the May city council meeting,” he admitted.

“If we don’t have any pressing business,” let’s cancel it, said Mayor Carlyle. “Would there have to be a public notice that we’re canceling the meeting?”

“We just have to post it beforehand,” responded the secretary.

Finally: it seems the mayor’s wife has had some ugly-looking bathwater lately. Probably because the pump on well #2 blew itself up. This was hardly a crisis like the Fire of 1880 that destroyed the city, but still: it’s icky bathwater.

“If you let that water sit, you’ll notice that nothing settles out of that water,” the city manager noted, let’s say…reassuringly?

There was nothing they could do, so the council agreed to add it to the list of things to complain about.

Final thoughts: For a city plagued by tainted water, canceled meetings, and a questionable 400-calorie diet, the mayor showed great poise. I would give this meeting a rating, but sadly a train is blocking me, so oh well.