A few weeks ago I chronicled the London, Ohio city council meeting. To refresh your memory, it was a real humdinger, with the mayor’s “fun fact” being that he lit a barrel on fire downtown. You know–the People’s Business.

Sure enough, during last week’s city council meeting, His Honor the mayor had a few choice words for the Chronicles:

Mayor: Now on to the mayor fun fact. Some of you already know we’re starting to get some national attention. There’s a man out there by the name of Michael Karlik who has a hobby of reviewing city council meetings from all over the United States…everybody has their own hobbies, I guess.

[Collective sigh from council members. One councilwoman lays her head on the desk.]

Mayor: I’m not sure how he stumbled upon ours, but he did. And he wrote about us and tagged me on Facebook and Twitter. And it was about our June 16 meeting. Most of the focus was on my mayor fun fact last month, which I talked about lighting a barrel on fire in downtown London for the movie. So I thought I would pay him the ultimate compliment by making him my mayor fun fact for this meeting.

I am genuinely honored, Your Honor! I’m sure the flaming barrel feels the same way!

Mayor: The writing was actually very witty and well done, I thought. I got a good laugh out of it and it was pretty interesting, so if you guys want to go back and look at it, most of you guys were mentioned in the article. It’s under councilchronicles.com. So you guys can check that out. I just thought it was pretty funny.

Is anyone else crying because they have something in their eye?

I am deeply grateful to the mayor for his shout-out at the city council meeting. So much so that I am officially naming London, Ohio as a “Friend of the Chronicles.” With that status, of course, comes the right of prima nocta over all other city councils, plus this trophy. 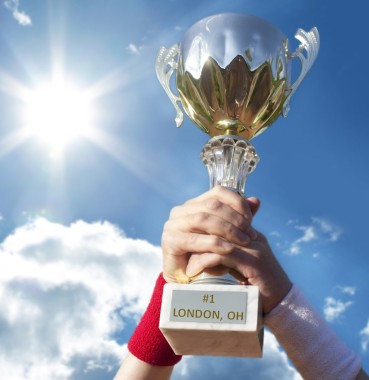 Readers, if you ever find yourselves passing through London, remember to stop and give the mayor a pat on the back and a smooch on the cheek. Then gently whisper in his ear, “You’ve been chronicled!”