This podcast interview is available on iTunes, Stitcher, Player FM and right here:

Helen Rosenthal represents the Upper West Side on the New York City council and BOY, did she have some fun stories! From the candy in her desk to the Elmo and Batman characters at a council meeting, she gave us a peek inside the City [Council] That Never Sleeps!

Q: With all the different groups on the 51-person city council, do they stick together in the council meetings? Like, do the progressives all wear armbands on one day, or does someone in the women’s caucus hand out candy, or–

A: Well, to be clear: I have the candy drawer. Definitely, I think candy gets you a long way with your colleagues.

Q: What kind of candy do you have in there?

A: Only York Peppermint Patties.

Q: Love those things! How do you decide where to sit?

A: Every two weeks approximately we get together as a chamber of the whole and we have assigned seating. And we have a little nameplate on our desks so we know just where we sit. And that way, again, no one really has access to my candy drawer, which is critical. The seating plan is determined by the speaker of the council. And it tends to be the same seating plan for the entire term of four years. Very rarely would someone’s seat get switched.

Q: Have you ever seen someone’s seat get moved?

A: I have. There were two of my colleagues who were having too good of a time sitting next to each other, so they were split up. So…that happened.

A: I’m between Dr. Mathieu Eugene and Council Member Rosie Mendez. And if we went out to a bar and drank heavily for quite some time, I could tell you the reasons why I have that seat. But now, suffice to say, I love where I sit and–

Q: NO, IT DOESN’T SUFFICE TO SAY. TELL ME THE STORY, COUNCIL MEMBER.

A: That ain’t…that’s under lock and key!

Q: Any interesting moments in the council meetings that you can think of?

A: I more found it amusing that someone would come to a city council hearing dressed up as Batman and the person who was the sponsor of the legislation would want their picture next to Batman. I’m very careful not to be standing next to Batman when a picture is taken.

Q: Batman is an American hero, ma’am. What do you have against heroes?

A: Nothing! I was really traumatized by Dukakis’s moment when he put on that helmet and was swallowed up in it. I try not to wear hats.

Q: I should mention that my researchers found a tweet of yours…it’s a picture of you wearing a Big Apple Circus hard hat, and behind you is a clown wearing face paint and very bright overalls. 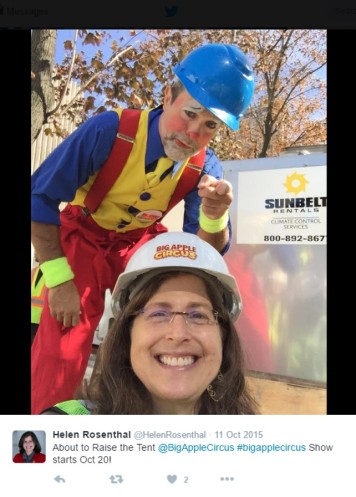 What do you have to say for yourself?