This podcast interview is available on iTunes, Stitcher, Player FM and right here:

(And if you want to skip ahead to the fun radio play we did, here it is:)

You may recognize Lan Diep from his city council swearing-in ceremony during which he held a replica Captain America shield: 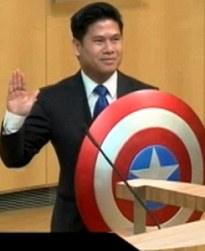 It was an inspiring moment. But let’s keep our eyes on the prize: he’s a freshman council member in San José (yes, it’s spelled with the accent mark) who is new to the city council meeting game. That’s why I asked him about his “jitters,” his boisterous first meeting, and who his amigas are on the council.

Q: Before your first meeting, you tweeted this:

I'll sit on the dais for the first time in about 30 minutes and boy, I gots the jitters. You got this, Lân… you got this!

What were you jittery about?

A: You campaign for this thing and until you actually get up there, it’s this abstract idea. You can’t anticipate what the job will be like until you’re actually there. There has been a bit of an awakening–not good or bad. Just different.

Q: Is there some glaring disconnect between us watching you on the city council meetings and what you experience?

A: What I didn’t anticipate is that this would be a lifestyle. You can go to an event and see your mayor or your council member get on stage, say some nice words, and shake people’s hands, then leave. And you think, “wouldn’t it be great to have my name called out to be on that stage!” What you don’t realize is you’re still at that event, but the council member probably has three or four or five more events that day. The physical toll of that was a surprise to me.

Q: Your first council meeting was a doozy. You had a full house of mostly Vietnamese and Vietnamese Americans and the topic was whether San José would fly the flag of the Socialist Republic of Vietnam (communist Vietnam) or the Vietnamese Heritage and Freedom Flag. A hundred people came up and talked emotionally about what the communist flag meant to them. Did it surprise you to have that be so controversial?

A: Um, no. San José is home to the most Vietnamese people in any one city outside of Vietnam. Whenever they can, they do things like get their city government to oppose flying the Red Flag as a way to say to the government in Vietnam, “we reject your rule.”

Q: Is there someone on the city council you consider a best friend?

A: I have two people I feel close to. One is Council Member Dev Davis, who I jokingly call my “work wife.” [We] go around to events together. The other person I’m close to is Council Member Sylvia Arenas, who I’ve jokingly called my “best friend at work.” We made a video together reviewing the crab sandwich at McDonald’s that’s being offered for a limited time in San José!

Q: Lan, can you tell the listeners what you put in front of you on the dais during the council meetings?

A: [Laughs] I have a little Captain America Funko POP! figurine that I put in front of my computer monitor so when I’m speaking, he’s hanging out with me. I’m owning the Captain America thing that I unintentionally thrust upon myself. It was a surprise to me that a lot of people tweeted at me saying that I was cool or wished I was their council member. Some people called me an embarrassment. But what was really touching and unexpected were the people who said I presented to them some symbol of hope–I reminded them to look past party lines.