This podcast interview is available on iTunes, Stitcher, Player FM, and right here:

Brandon Chapman is a first-term council member and (apparently) a seasoned art critic. We explored his opinions on utility box paintings and discussed what he is still getting used to in the council meetings.

Q: Brandon, from what I understand, you are a longtime listener of the podcast, including before you ran for city council. Is that right?

A: That is correct. I’ve always had this interest in all things municipal. I don’t even know what I googled or what I put into the iTunes search. So I started listening and I thought, he’s bringing the humor, which is important. And of course, really good interviews. Plus me! It’s truly comforting to realize that my city is not nearly as dysfunctional as some other ones.

Q: I wouldn’t call any city dysfunctional. They are all like my children in that I would give them all up for adoption if I could. But what has City Council Chronicles meant to you as a council member? And I’d ask that if you are going to cry, please do it directly into the microphone.

A: Right. You’re listening to them and they’re coming up with the same kind of issues that maybe your city is facing, but they’re tackling it from a different way. And you hear something and you’re like, “oh, I’m not sure I ever thought about that. But maybe that’s a possible solution!” So for me, it is a huge educational opportunity. You could even call it a professional development opportunity for city council members.

Q: Recently in a meeting, you guys selected artwork to go on utility boxes. Is that normal city council business in Pullman?

A: Yeah, I wasn’t expecting to become an art expert overnight! It was a crash course. And I think I’ve learned quite a bit.  We got to move toward even evaluating the art–that was a real shock to me. We only have one utility box that’s wrapped. It was decided that they looked ugly. It looked better than just the metallic, just the gray. But it was also, you know, very lifeless, I thought. And so this call was put out [to artists] and I was fully expecting that there would just be a presentation, but they asked the council’s opinion. 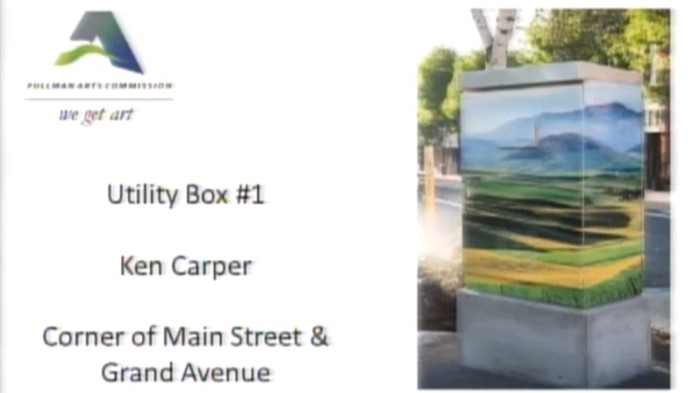 Q: For this first painting, “Woman Who Travels,” you said it would make a nice mural. Do you still believe that?

A: Yeah, in order to understand this, you need to see every part of this painting, of this drawing. And if you wrap it around a utility box, I don’t think it’s going to leave the viewer with enough to come up with their own definition of what it means to them. To me, I started looking at this thinking, a recognition that I’m still growing. Have to understand things like white privilege and male dominance and patriarchy. 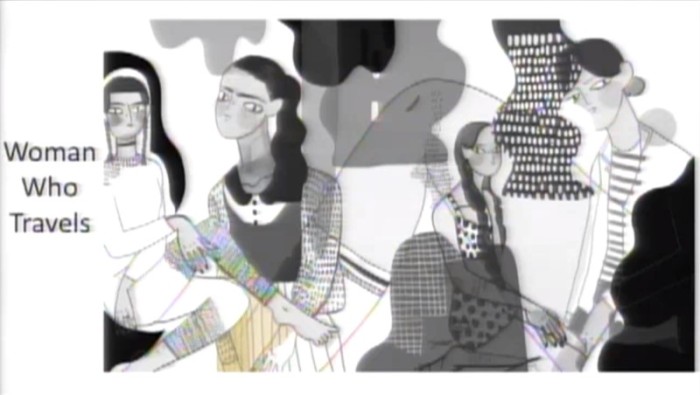 A: It’s obvious artistry that’s borrowed from Vincent Van Gogh, from “Starry Night.” Van Gogh painted from behind the window of this asylum and that almost alluded to a detachment or a loneliness. There’s a world out there, but it’s untouchable. And the starry lentils would be, it’s in the open. There’s nothing holding you back. The world is for your taking.

Q: Were there any council members who gave their opinions on the art and you were like, “ew, is that your taste? I’m never going with you to pick out wallpaper!”

A: Well actually, I think most of the council members had the same opinion. So they’re a bunch of copycats! I started it! I was the first one.